The origin of the the word “dunce” is an interesting story. The name synonymous with a prominent school of philosophy becomes the moniker for those who refuse to disavow it and accept the contemporary wisdom. Eventually it transitions into a general term indicating a stupid person, before finally (I am assuming) it crystallizes into its curious and unique, almost grotesque, end: the dunce cap. Does abject horror describe the humiliation children felt upon being capped and put in a corner? Is the image of such a spectacle too hilariously absurd to imagine it clearly? I am having trouble getting my head around the first question, because my answer for the second is almost an emphatic yes.

I am not sure how I got onto this topic, but the first thing I can remember was wondering: who says “dunce” any more? And then: what happened to the dunce cap? It was certainly extinct in my New England schooling in the 1980s and ’90s. In my experience “dunce” and “dunce cap” are currently funny, infrequently used and almost peculiar terms. Like a vestigial structure — say the coccyx or the tiny stub of a mayfly’s filament (as pictured above in a Hexagenia sp.) — in the evolutionary process, a word in the etymological process has a shelf life. Two kind of vestiges that are both curious reminders to me of loss and evolution, of memory and time. I see each of us becoming a “dunce” of mayfly sooner or later, passing away and passing forward at the same time; forgotten and reborn, impossible and ageless. 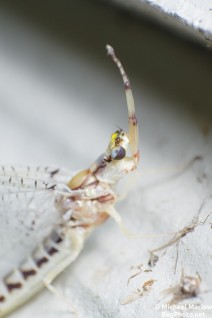 Before I pass into duncehood, I decided to give our vestigial filament carrying mayfly its own cap. I know, it didn’t deserve it, but I think it’s funny (it’s standing up against a wall too).