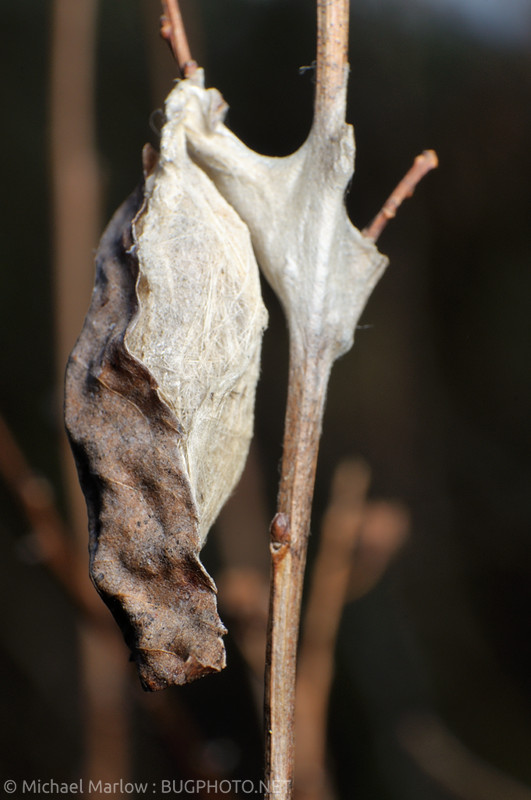 Well, sort of. The cocoon pictured above (I am guessing some sort of Lepidoptera pupa) seemed like a good chance to test out some handheld, natural light (with fill flash) shots. This type of shot wasn’t something I was really thinking about, apart from the daydreaming bouts of inspiration after seeing other photographers’ great natural light shots. As it happened, I was browsing my Flickr contacts’ photos and came upon a striking photo. The shutter speed displayed as 1/50 or so, and I asked the photographer if he had used a tripod. Sure enough…he hadn’t; he used fill flash with natural light, handheld. It was such a sharp, vivid photo, I thought, how does he do this? Was his equipment that much better? Were his hands that much steadier? I decided, maybe…but maybe I’m just talking myself out of good photos. I decided I had to give it an earnest try.

The photo that inspired me was of a beetle, but I wanted to avoid the frustration that a moving target can cause even with full flash; there was no point in choosing a difficult subject only to get fed up fast and discourage the whole idea before I made a sound effort. When I saw the cocoon, I decided this was the one. The only movement I had to contend with was from the wind (not too bad that day) and my own clumsy bumping of the twiggy bush the insect had attached itself to.

Apart from reducing the shutter speed and flash output, raising the ISO setting was the main setting I could manipulate. (Given the depth of field involved, enlarging the aperture was not much of an option.) But the thing is, I am loathe to bump up the ISO setting as I don’t think my D5000 does that well above it’s native ISO setting (200)…which isn’t completely fair as I have an ingrained loathing of anything but the minimum ISO after my early macro days — when, essentially, I realized too late that my auto setting almost always chose the highest ISO, leaving many of my photos seriously degraded with copious noise. So I have somewhat compulsively shot at ISO 200 since I acquired my DSLR. For this endeavor, however, I obviously had to ease up on the compulsion.

The shots went fairly well to my surprise. I did notice some fuzzy outlines in some of the photos that might have indicated camera shake or subject movement, but I liked the results. For the fill flash and natural light photo above, I shot at 1/60 sec, ISO 400 and flash output manually set to 1/8 -2/3. It was difficult to make good use of the depth of field, but I am happy with the lighting; the noise was not troublesome either. For comparison, I took a flash shot, as shown on the left above. It is at a different angle which doesn’t have the nice blue sky in the shot much, and not as much care in general with the composition, but I don’t think it would have come out much more different in its lighting. I went down 3 stops or so (if my self-taught knowledge is on the ball) as the flash shot was set at 1/160 sec, ISO 200, flash output 1/8.*

All in all, I think it went well for a first go.

*P.s. If you’re looking for an aperture setting, I’d give it to you, but my reverse lens doesn’t really have anything because it is manually set (usually with a toothpick or, lately, a mountable aperture adjuster specifically made for a reversed lens).