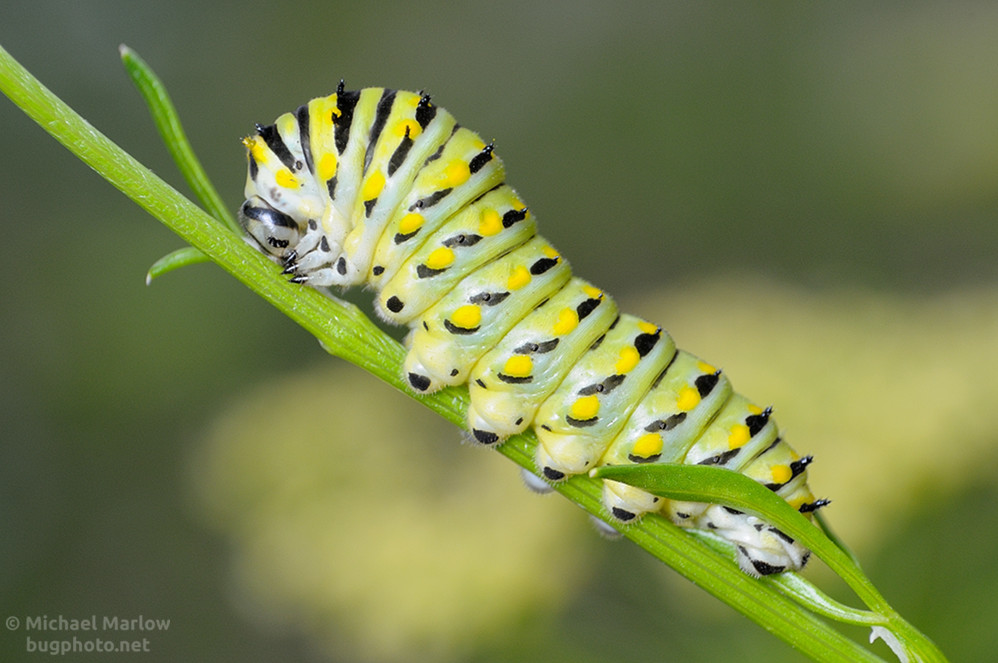 A parsley worm, a.k.a. black swallowtail caterpillar, “prays” on the stem of parsley plant

The “king,” i.e. the monarch butterfly, is purposefully not the featured photograph of this post. They have been noticeably diminished this year, continuing a trend of ongoing population decline since the late 1990s.

The annual count of butterflies in their winter habitat in Mexico showed a 59 percent decline in the population from between December 2011 and December 2012.

It is normal for insect populations to fluctuate because of weather and other conditions, [Chip Taylor, of butterfly conservation and monitoring organization Monarch Watch] said. Monarchs depend on a “Goldilocks-type of ecology,” he said, and a too-hot summer or too-cold winter can affect their migration.

But the monarch’s decline has continued since the late 1990s. The population peaked in 1996-97, at nearly 18 times what it is today.

And so it goes. I personally have not seen one Monarch butterfly or caterpillar this year. I find this very depressing, and I am not even especially fond (just regularly fond) of Monarchs. You can check out Monarch Watch for more information and what you can do to improving the plight of what many consider the de facto national insect.

Meanwhile, I am going to pretend black swallowtail caterpillars are praying for their cousins. (Don’t they look like they are praying? I think the one above is just taking a nap in between parsley gorging sessions.) The caterpillar above is moving along from early instars as you can see the last remnants of the “baby” stage’s spines. Incidentally, the parsley boldly rebounded this year after the previous year’s paltry patch. Despite that, I did not notice a single parsley worm that had taken up residence; and I could have sworn I saw a black swallowtail curling its abdomen in there, early this year.

Hopefully next year I will be able to write a “Return of the King” post heavily-drenched with Lord of the Rings references. Maybe for the black swallowtails I will get a Blood Sister: One Tough Nun reference in there (nuns = praying, duh).

One thought on “Say a Prayer for the King”