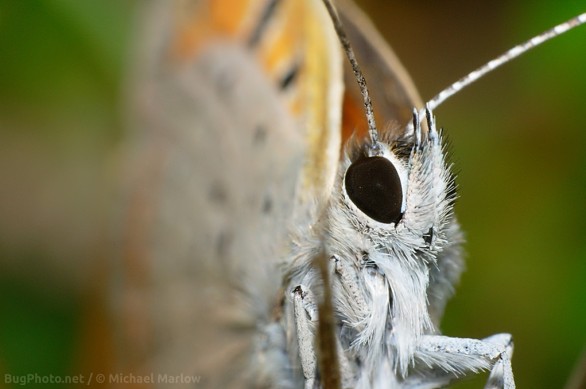 The Little Copper is one of my favorite butterflies. I wouldn’t call it my doppelgänger, but I trust it (much) more than a politician to represent me. Piggybacking off my last post, most of my little copper shots are of backyard residents — they  have claimed one of the roadside edges of the yard, faithfully showing up each year to feed off of the clover and thyme flowers. It is not too difficult to approach them, unless you’re into higher magnification ratios <raises hand!>, in which case patience and keen, diligent eyes — they have some fantastic, evasive flight paths — can make that work, too.

I am featuring here portraits of one particular little copper, and hopefully what they illustrate is the difficulty in photographing these curious bug’s eyes. Like humans and other mammals, capturing the eyes of an insect typically makes for a more compelling photograph. In the current examples we can see how the eyes are essentially big, dark brown spaces, almost as if I poked a hole in the photograph. Butterflies have a compound eye, but those eyes, unlike a dragonfly’s, for instance, usually do not give off reflections that help illuminate the multiple lenses. Instead we got the brown orb. Or orbish thing.

I haven’t figured out a way to get around it. I have done natural light shots before, but the eyes look similar. A longer exposure might help, but at the high magnification, that is going to be unlikely barring an early morning situation with a “slumbering” model. On another note, while they don’t show the detail of the individual lenses as in a dragonfly, they do have similar harsh reflections from the sun: if you look at the full-size images, the hexagonal diffracted(?) light on the eye stands out (at least more than the very light detail of the lenses).

Another thing I attempted to accomplish, was to bring out the scales on the snout more. It is probably more noticeable on the second image (below). [Note: these are two separate images each processed two different ways, just to be clear.] It worked, I’d say, but I lost some of the already faint detail in the eye and the brightness of the background. I may have gone a little overboard in the sharpening department, too. As always, feel free to let me know what you think. And be nice to your bugs.

5 thoughts on “All in the Butterfleyes”