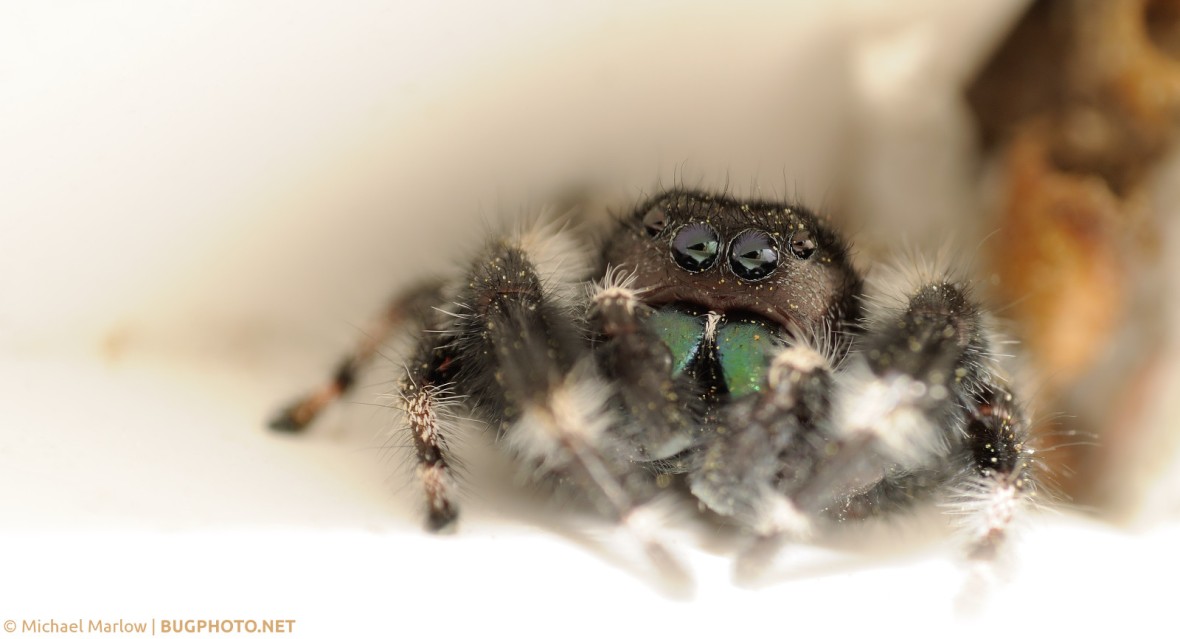 A Bold Jumping Spider, Phidippus audax, watches intently from the corner inside a window.

Aside from bugs, dogs are my favorite critters, and so the news around my hometown has been on my mind. I don’t really have anything about dogs to go with the above Phidippus audax jumping spider photo, except that these spiders remind me in an odd way of dogs. It’s their curious nature and seeming fearlessness. I wouldn’t be too surprised to hear someone taught a jumper to play fetch one day. This photo is from the archives, a few years old at least. I had backed this fellow into the inside corner of a vinyl window frame (I know not “curious” but they’re not stupid either!). From a photographic standpoint, the difficulty here, aside from maneuvering the camera to an angle to get good focus, was exposing the shot properly. The white vinyl in the foreground was more or less completely exposed to the daylight while the spider’s retreat was in shadows from the windows. Essentially I overexposed the whole shot to bring the spider “out of the shadows.” And though it was actually a little darker in there than it appeared, I think the details and colors of the spider’s head came out very nice. The glossy sheen on the eyes was particularly pleasing for me. The foreground (part of which I cropped out) is blinding white. I don’t think it’s too bad, but the shadows of the forelegs look a little warped and unnatural. Such is the indoor vinyl window macro shot. And I’m not complaining; indoor subjects are the only ones I’ve shot lately. Time to get ready for winter. P.s. The brown bit on the right side is a shed exoskeleton — I think. It could also be the leftovers of an old lunch.

One thought on “One Bold Little Puppy”