The stilt-legged flies, family Micropezidae, make characteristic movements of the front legs. We can call them “fly jazz hands.”

Arthropods as living works of art are fairly perfect in their unique and arresting forms and colors. A third artistic dynamic, if not always present, is motion.  The movement of an insect or spider illuminates the subject’s behavior which in turn reveals a character and possibly a narrative in the human imagination. Or in a word, Spiderman. Now, I’m not sure Stan Lee had macrophotography in mind, but sometimes getting a picture of a spider (or bug) in action is as hard as getting one of a superhero.

As I have stated before, macrophotography is pretty much photography with some extreme parameters to work within. Lighting, depth of field and working distance all figure prominently when a moving or active bug is the target. A high shutter-speed, usually abetted by a flash, will freeze the subject in a precise moment. Certain moments lend themselves to easy demonstrations of motion. A basketball player dunking a basketball or a runner in stride would be human examples; the most obvious example for a bug is probably an insect in flight. A hummingbird clearwing nectaring at a flower conveys a distinct action, though there are different tacts to take. If you follow the link, you can see I have frozen the wings, but a slower shutter speed would have captured a blurry swathe of the furiously beating wings and (hopefully) the body in sharp focus.

The flapping wings of a big moth makes for a nice, juicy subject, but just as with people, there are smaller and subtler movements that can be just as powerful or interesting. The fly featured in this post is a member of the aptly-named family of stilt-legged flies. They have a curious behavior of frequently moving their front legs, apparently to imitate ichneumon wasps. I don’t see it honestly, but the behavior is neat to watch. Of the three photos, I think the first, the super close-up, conveys the motion best. The front-facing photo is a bit more disorienting as to what we’re actually looking at, but once you identify the black front legs, you hopefully get a sense of some peculiar movement. In the third, not much motion is apparent, and honestly I cannot remember if the fly was engaged in its distinct hand-dancing or if it was merely coming to rest.

While blur is a surefire indicator of motion, I don’t think it would have been very effective with the stilt-legged fly. Apart from the difficulty of maintaining clarity on the body, the very thin legs aren’t moving incredibly fast and I don’t think they would cover a substantial area to make an interesting feature. A wispy blur at the front of a subject may also be distracting and confusing to the uninitiated: most people are not going to know what a stilt-legged fly is to begin with, forget about the curious behavior. More generally, foreknowledge is going to affect how people view the photograph. It is a good reminder that an audience receives a photograph and that playing to a crowd is not limited to a stage or athletic field. Of course, that is a question of artistic and business-related choices and a hand-dance for another post. 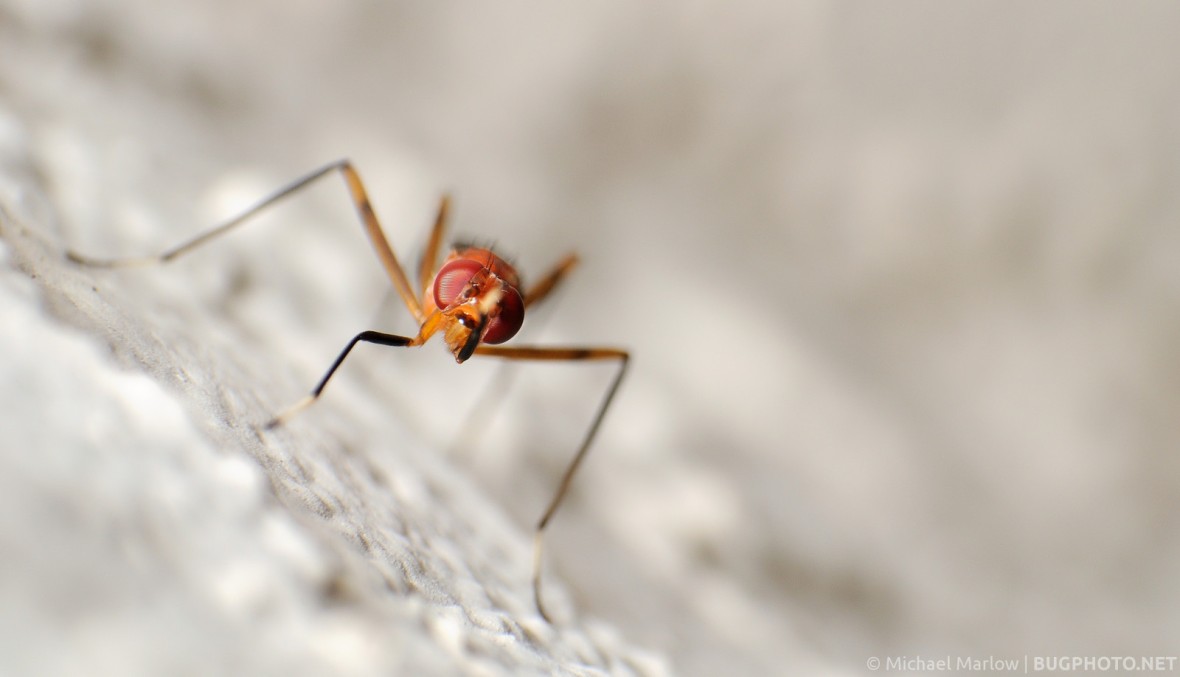 All head and legs: the fly dances from a facing angle.

The stilt-legged fly Grallipeza nebulosa in full profile. The motion in the legs is more difficult to read in this shot.