This is the seventh in a series of posts about the BugPhoto approach to macro photography.

In preparation for this post, I went searching through my archives, literally thousands of photos, for all the macro videos I have taken over the past three or four years. I found thirteen. I may have axed a few more after the fact, but that’s pretty representative of how often I shoot video. And as you will see in the handful of examples below, my results are…shaky at best.

The first video shows a yellow dung fly feeding on another smaller fly, shot with my usual Nikon kit lens reversed. It is one of the steadier videos, and like the others unedited, but it also has the benefit of a basically stationary subject.

And to give an idea of screenshot quality here is a photo still from the above video: 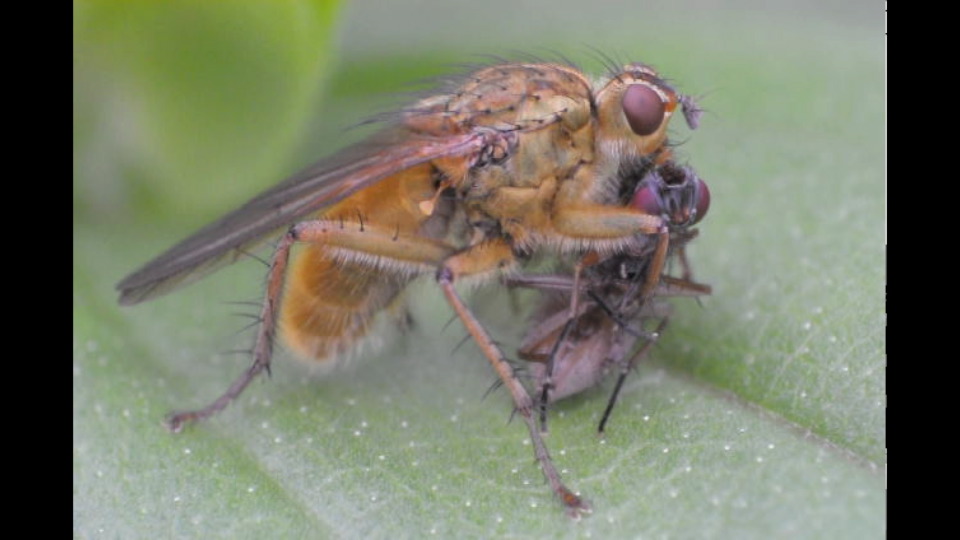 Still from video of a yellow dung fly (Scathophaga stercoraria) feeding on another fly.

These mating Common Green Darner dragonflies (Anax junius) were also relatively stationary. Being at ground level, it seems like it would have been easier to brace the camera and reduce shaking, but the problem is that the fine adjustments required to get focus — those which usually become part of the invisible history of a photograph — are on full, messy, headache-inducing display in video. Another thing to notice is the blown-out lighting. It was a very sunny day, and I had gone from shooting still photos to video and forgot to adjust my camera settings (the aperture, in particular).

In the below video of a Japanese beetle, I have the camera at the highest resolution setting (hence the bigger size). This kind of thing will vary from camera to camera; the newer DSLR cameras, including the entry-level models, should give much better video quality (if also much bigger file sizes) than the D5000.

As another comparison, here is a side by side of a still from the video and a photograph of the same cluster of Japanese beetle. The video features natural lighting while the photograph is illuminated by flash. (It’s worth noting that the video is unedited while the photo has been adjusted for contrast, shadows, etc. I only have iMovie ’08 for video which seems limited for editing video quality/colors.)

Still from a video of a Japanese beetle (Popillia japonica) climbing up a plant stem. 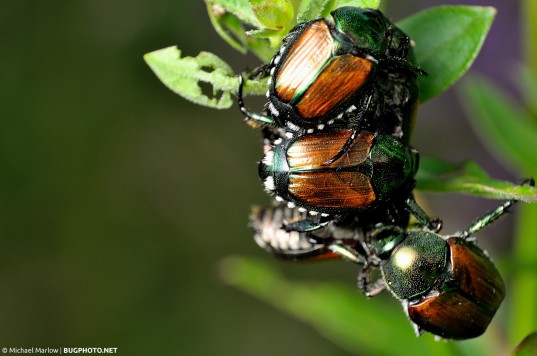 The robber fly in the video below has also appeared on the blog before. I’m not sure if it is apparent, but this one was shot atypically (for me) with a tripod – as I was going for early morning natural light shots – which gave it some extra stability. (Unfortunately, the wind was not so cooperative.)

I chose some of the better quality videos I have taken, which obviously speaks to the lack of success I have had. I have not really given it a concerted effort over the course of my bug-shooting days, but if we are considering handheld photography, the nature of camera shake is going to be prohibitive. A tripod would certainly help, but making the adjustments necessary to focus on a moving subject are going to be difficult in that case. Continuous focusing modes are probably necessary and with the reduced functionality of the reverse lens setup, a more traditional macro lens, or a lens plus extension tubes combination, may be more useful for shooting true macro video. I’m sure I’ll try my hand at it every now and again, but a more creative solution (or much steadier hands!) than I currently have will be required to make it work.

In the next BugPhoto Guide post, I’ll look at software and post-processing.