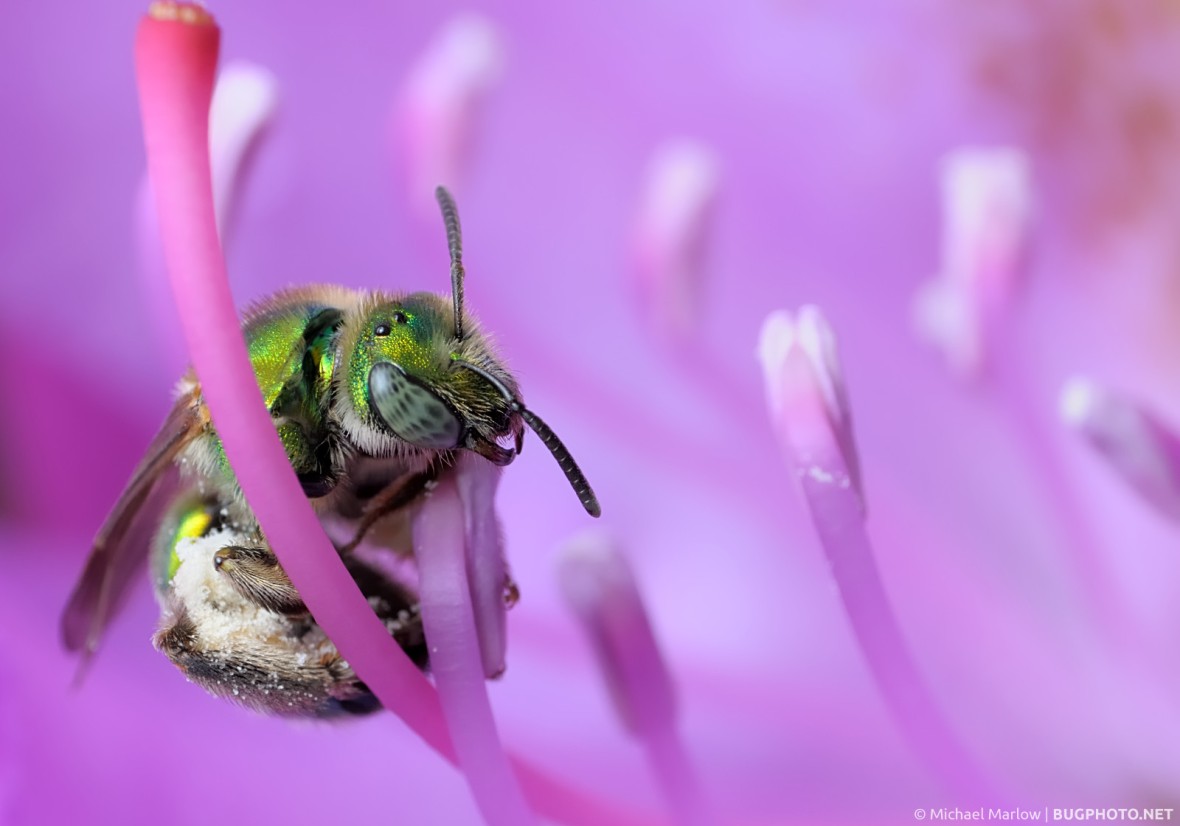 A metallic green bee with a hefty collection of pollen on its hind legs curls up and hangs on to a filament inside of rhododendron so it may feed off the anther.

As someone relatively new to the world of insects, I am still not comfortable with the common practice of collecting specimens.  From the more practical matters of preserving specimens to the collector’s challenge of the search and chase, it has not interested me; and in fact, it has always struck me as a morbid exercise. It surely is vital to scientific pursuits, for which I bear no grudge and no little admiration, but as a photographer concerned with artistic pursuits and a writer prone to metaphorical interpretation, it is difficult to separate aesthetics and data from the specter of drawers of corpses. When I think that people do it strictly as a hobby, I really cannot fathom it; it seems like an exercise doomed to diminish the beauty of life in the very attempt to preserve such beauty. It’s an activity driven by an impulse completely beyond me. And yet, it’s not.
When I was a child, I collected basketball cards. Quite religiously, impulsively and, more apt perhaps, compulsively. One of the young victims of my generation, I thought I was compiling a nice future portfolio for my career as commodity broker. Or you know, that Shaq rookie card was going to really pay off, anyway. My eventual disappointment in those cards’ lack of inherent value never matched my compelling interest in collecting the cards; thankfully, it was a case where the process ended up being the point: the search for something new and different and special, the agony of finding the “same old thing,” brushes with greatness (or the glass display case holding the good stuff at the card shop), and the satisfaction of getting a coveted card, knowing that something special belonged to me. The collecting impulse, the collecting payoff, whatever it is, is not restricted to cards or insects, or really anything at all, as far the human thirst to gather and organize things of a common ilk. To say I cannot fathom in the end is really not true, or not accurate; more so: I wish that I could not fathom it.

So regarding collecting insects, let’s say I do in fact get it, even though I don’t get it. In comparison to my photography, the fine line over which I don’t get it, borders on the illusory (but not quite). My photos are another sort of collection, not only an artist’s work, but a bug lover’s. The greatest indication of this can be seen in my archives where many shots — poor,  poor, woefully-conceived and -executed shots — remain because, simply, I don’t want to give them up. And not for their artistic merit. Instead, they are the markers, the “cards,” of my experience of insects; they are my records, my gets, and they are mine and no one’s else. The fine line, however, is still there, defined as it were, as the meaning of life — which yes, is a lot like not defining it at all, but I think that is also the point.

This topic has a great depth that I can see wrapped up with order and logic; value and what it means to value something; the anxiety of the contemporary age; art; etc., it has depth that my little post here won’t do justice. Someday I might tackle it further, in the meanwhile, the collecting and photographing will go on, separately and simultaneously. For me, apart from the bug photos, it’s (mostly personal) ephemera and Celtics championship hats (that second one is a joke, unfortunately). There’s also the “uncollecting,” i.e. purging, but I think I’ve whinged enough about my overweight photo archives in the past that I can skip that one for a while.

19 thoughts on “Of Photos and Insects: The Collecting Impulse”