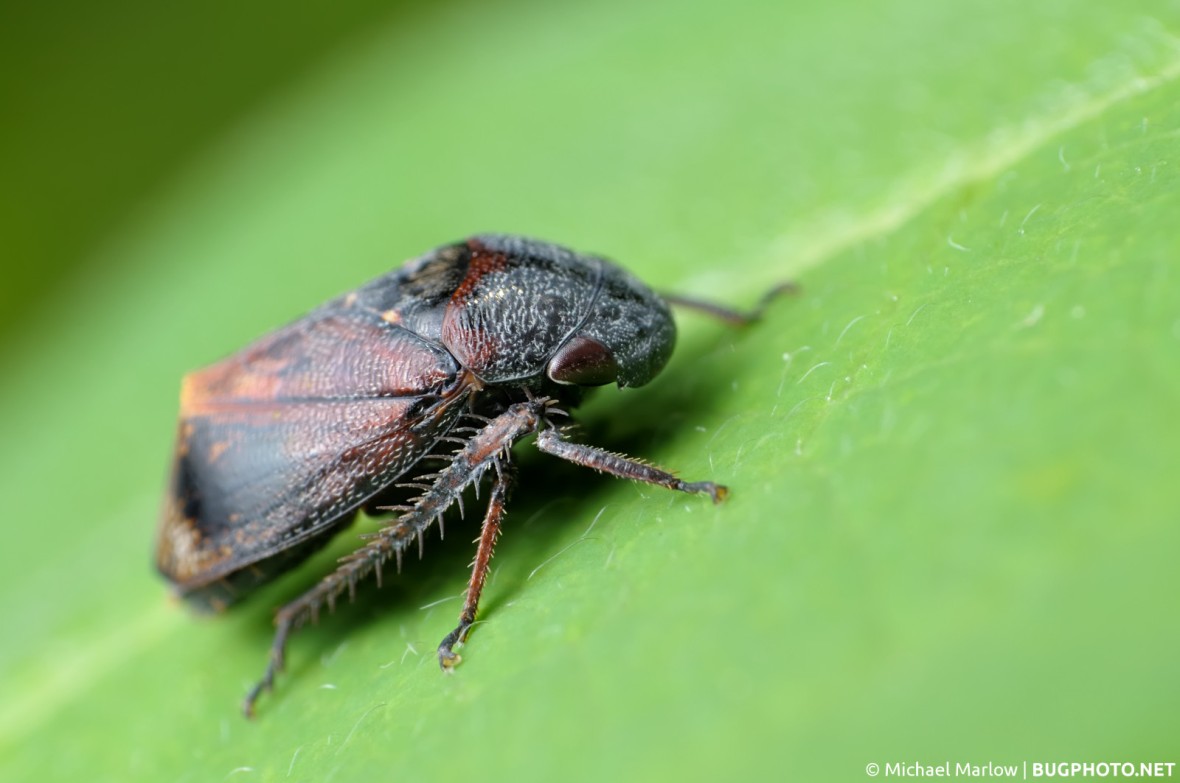 An oddly chunky leafhopper, Penthimia americana, is distinguished as a leafhopper from other “hoppers” by the spikes running up and down its leg.

After a certain while, I have developed an eye for identifying insects to one degree or another. While I don’t have all the proper terminology down and therefore couldn’t give a precise description, I think I often recognize, consciously or not, the distinguishing features necessary to get to one level of taxonomic identification or another. On this specimen, I was a bit challenged. Right off the bat, I could see it was a “hopper” of some sort, but there are leafhoppers, froghoppers, planthoppers and treehoppers — and probably a couple other I’m not aware of. (Grasshoppers of course not counting in this instance.) It was a good-sized, chunky individual by hopper standards, which seemed to distance it from the typically elongate leafhoppers in my mind. However, that kind of distinction is unreliable and a haphazard way to find a correct ID. So I didn’t really settle on any direction even though I still wanted to call it anything but a leafhopper — some sort of underdeveloped, mutant treehopper, maybe?

Fortunately for me, I follow some good blogs, like Entomacrographic, where not too long ago Marc had a post about a froghopper that also included some info for distinguishing certain hoppers. When I recently came back to this photo, it became pretty clear what I had here. Essentially the thoroughly spiked leg indicates a specimen is a leafhopper, and so my initial disbelief was misguided. Digging through BugGuide.net to get a species ID, took a little more legwork than I’d like, but there’s a lot of leafhoppers out there. Eventually I lucked out and an image of one of a P. americana happened to appear under very large Superfamily grouping. At this point I try to be careful — while I may have a similar looking  individual it’s good to look down (or is it “up”?) the taxonomic tree. The genus Penthimia revealed a number of similar-looking species, but on the “info” page for P. americana there was a note saying that only two Penthimia species live in the Northeast, the other predominantly on the coast. As I am not on the coast by at least a few hours’ drive, I felt pretty good about settling on P. americana.

That turned into a sort of vignette, liberally speaking, on using BugGuide.net to identify an insect, but hopefully it was helpful. For the non-entomologist I think it’s usually a boon to identify a bug, but, at least for myself, I sometimes find it difficult to sort through the rigorous and precise keys for identification. Either way, the good part about the process is that there’s always something new to learn.