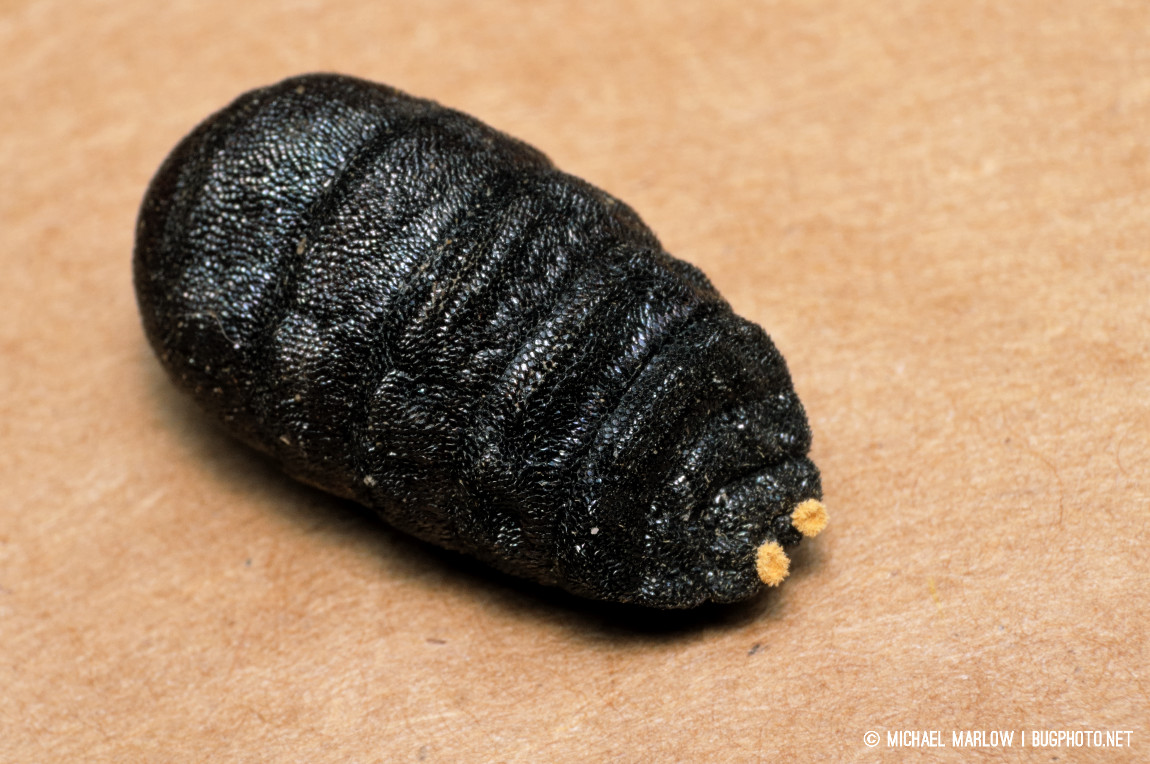 The title of this post, of course, refers to the rodent bot fly larva featured in the photographs. And not the blog itself; though admittedly, that’s also a fair question. I was not inspired to write posts and have not posted in a long while. It was not for lack of material; I have a neglected, virtually-dusty archive to last more than one photo-hard winter — which for me would technically be summer. Maybe this summer, you might say, because the lack of inspiration extended from blogging to photographing; I didn’t shoot much at all, and almost as often as not it was my dog, rather than the bugs. I believe the total of bug shots taken ended  up south of 1,000, which is probably about 3 to 5 times less than in the past few summers. A cocktail of depression, identity crisis, artistic frustration, and probably worst of all, boredom1, really drowned out my photographic production. Recently however, I have been going through the archive and editing quite a few photos, preparing them carefully in the old way, i.e. for publishing here on the blog, even though I was more focused on the intricacies of digital post-processing and editing. At a certain point, I came back to a series of shots I had taken earlier in the summer and realized the dark, mysterious, and perhaps lifeless creature I had captured would be the subject of my return post.

Incidentally, “captured, perhaps lifeless creature” continues to describe this particular insect. It is a fly of Order Diptera, most likely a Cuterebra sp., a rodent bot fly, and it’s sitting in a plastic deli container (with holes! bugs gotta breath, too) waiting for me to figure out what to do with it. You may be wondering at this point, how did I manage to come by this unusual insect? My mom gave it to me, though it wasn’t exactly a gift. She found it in the driveway while cleaning up outside, initially thinking it was a bit of poop one of the little, local (as-yet-unidentified) mammalian neighbors like to leave around the house. The little “turd” was about an inch long though, and on not much closer inspection, obviously not fecal matter. When I first examined it, I didn’t think it was living at all: deeply black and finely textured in a shiny and uniform way, it looked like a miniature bit of god-knows-what covered in tightly-woven nylon, reminiscent of the outer layer of something like a bungee cord. But then I noticed the two fuzzy sprouts at one end, and a strong hunch lit up my brain.

The structures looked awfully familiar and insect-related, and yes(!), it came to me: I had seen them before at Piotr Naskrecki ‘s excellent blog The Smaller Majority. (And as Piotr warns, some things you can’t unsee.) It turns out they are spiracles, the structures through which insects breath. A quick search on bugguide.net confirmed my suspicion that it was a bot fly pupa. I had a bot fly on my hands! Yeehaw! New, unusual, never before encountered by me lifeform! Yeehaw! Yee—wait, I had a bot fly? As in the mammalian-burrowing parasite, the personal micro-nightmare of tropical tourists and all-too-likely inspiration for various sci-fi-horror alien monsters? Oh. I had a bot fly. What do you do with that?

First off, I should point out that these kinds of flies enter the host during the larval stage, and this one was already in its pupal form, no doubt having made some kind of rodent’s life a little miserable. Irrespective of that, rodent bots don’t even bother with people; the human bot fly does not occur in my area (it’s more of a central and South American species). So, I wasn’t really worried about “unleashing” a malignant force upon myself (I know, very dramatic), but I’d just seen an article about cats and dogs being susceptible to Cuterebra flies. I didn’t want to expose my pup to such a beast, but I’m not really into willful killing of insects, and I don’t really know how serious (read: likely) of a threat they are to a canine. Life is life, and as gross as a bot fly may be on one level, I think it’s pretty fascinating on another. Which brings me back to the point we began this post at: is it alive? And the answer is…drumroll, please…I have no idea! My wild guess: no. It’s been sitting in the plastic container a couple months now (except for when I took it out to photograph…and in the process accidentally dropped it a couple times, doh), and while I’ve more or less decided to let it hatch if that’s in the cards for it, I haven’t been too proactive in helping it do so. We’ll see what happens.

Ethical and animal-husbandry questions aside, this insect was hard to photograph. Just sitting there, it looks like it’s charred, but when the flash illuminates the hard-scaled surface, it shines without revealing much of the fine detail. The darkness of the puparium (i.e. the final, hardened skin of the larva covering the pupa) also made it very difficult looking through the viewfinder to get a desired plane of focus. It was a frustrating exercise, but I managed some decent if not especially creative shots. 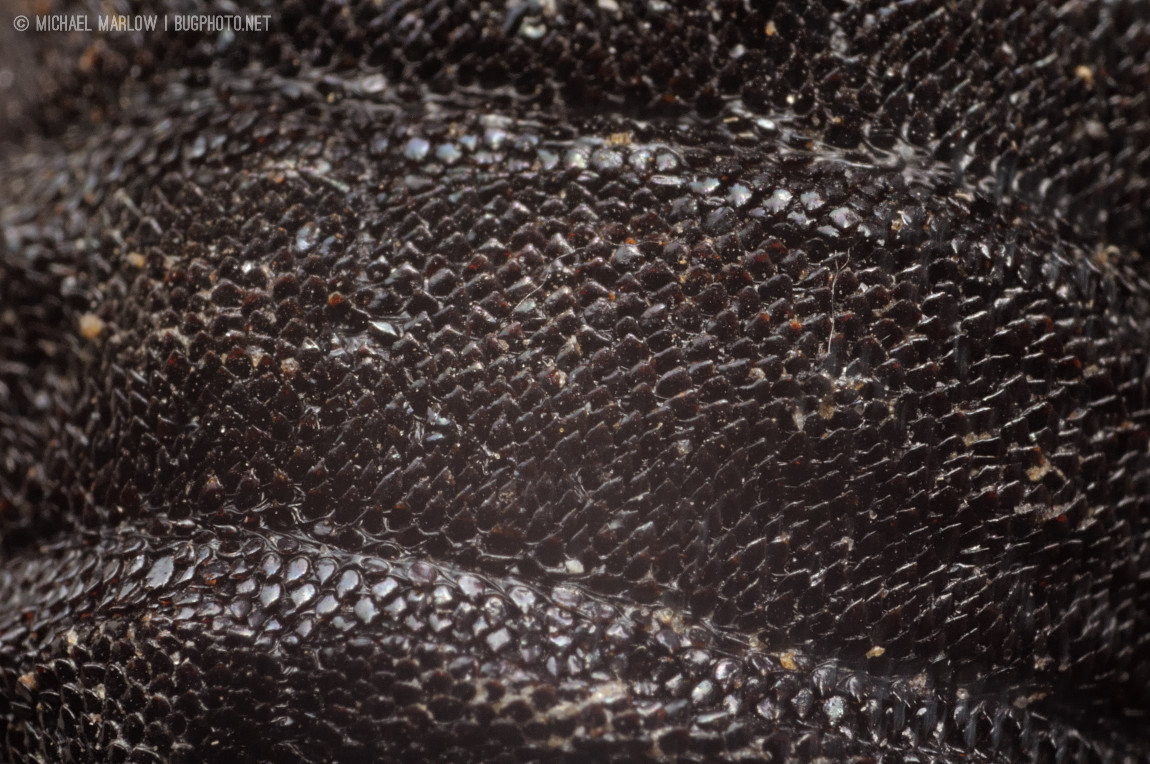 It seems like I wrote a lot and left so much unsaid here. Hopefully, that is a sign of shaking off the rust, but  this strange, even awing creature merits a lot of interesting thoughts, which maybe this post points to, even if it doesn’t expound on them. In any event, I do hope it’s alive, and I hope to get on a regular posting schedule soon.

(Note: Black and white version at the bottom of the page.)

1. Boredom, I would define here as a lack or absence of inspiration as opposed to a more prosaic one of lack of interest. Photography and insects certainly still interested me; the problem was I couldn’t find a way to take the shots that made it worthwhile. I guess you could brush this off as a typical consequence of depression, but considering this correlation is artless to the point of compounding the problem, I don’t really see how it’s useful or any more accurate to look at it that way. I will say the more unique finds of the summer lifted me out of the morass enough to want to swim, even in the mud. So I think the interest was there all along, my trouble was (is) finding a way to breathe it in. It is a struggle to learn how to “breathe” again.

7 thoughts on “Is It Alive? (Cuterebra sp, Bot Fly Pupa)”