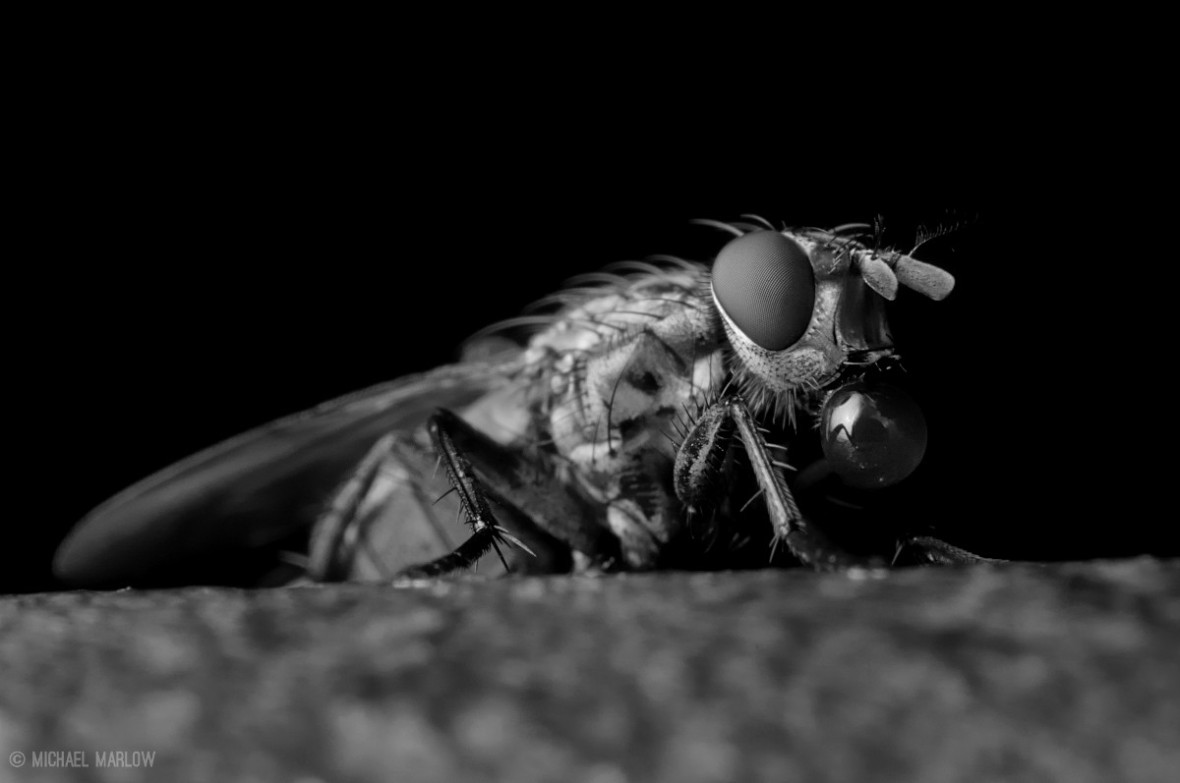 A fly blows a bubble of liquid out of its proboscis. (Black and white version)

I chose this photo, because it is one of the few cases where I outright preferred a black and white version to a color version. (In this case, I didn’t even bother to save a JPEG in color.) Black and white photography gives me some trouble. It seems apparent that color versus monochrome are different, though contrast and a wide-range of tonal values seems important to both. Maybe it’s just easier for me because I see in color, and as far as insects and spiders go, color is often the most beautiful or interesting part about them. Of course, most people see in color, and colorful subjects of all kinds have been rendered masterfully in B&W. At this point, I begin to wonder if it might be related to my photographic education.

I am self-taught, though I have learned and continue to learn from various other photographers and their work. The one time I took a class of any kind on photography was in my undergrad days; it was more of an extracurricular activity, a very relaxed thing where we met six times or so over the period of the academic quarter. It’s the one time I have shot and developed my own film; and mostly what I remember learning about was working in a dark room, which — and god bless the film people — was not for me. (The age of digital cameras was coming just around the bend, thankfully.) We shot in black and white film, but I don’t remember getting any of the secrets to unlock that particular medium and monochromatic photography in general. And yes, it seems to me there are some “secrets” out there that initiates have hidden in their empty film spool containers. I’m kidding. Kind of, sort, maybe, not really. It actually seems like it may be a simple thing from a Photography 101 course; failing that it could be something more intuitive that I’m lacking, but either way it’s lacking.

Naturally there’s only one thing to do about it. If you thought, “Pay thousands of dollars to take a university course!” then you are correct if what you actually meant was hit the google button! (In this case the DuckDuckGo button.) My casual search turned up a bunch of articles — I liked this one more than most; it laid out a workflow and detailed the post-processing — that tended to highlight ostensibly different (or maybe ostensibly “nuanced”?) factors and tips, but it seemed to come down to this: “Think in” black and white. Or an inverted variation, “Forget the color.” When people say this, they often mean look at the shapes shapes, textures, sources of light, and, probably most importantly, the tonal values. Maybe it’s just the nature of macrophotography, where things can become abstracted fast, but those things seem pretty important to my color photography. The difference, apart from color’s ability to enhance, cover up, or at least distract from what otherwise might be a dull or poorly captured photograph, lies with the tonal values1. It makes sense, especially when you take the color out of a photograph and you end up with a flat puddle of joylessness or large indistinct and attention-stealing spaces of (might-as-well-be) pure black or white. For me, the trouble is how do you forget the color? How do you see “through” it? Unfortunately, those are not rhetorical questions. (Answers welcomed!) This is where I get a little flustered; I obviously have some secrets left to figure out.

1. What is a “value” in a digital photograph? Well, intuitively, having worked with features in GIMP reliant on “value,” I reasoned it was (or was related to) the brightness of a given pixel. Finding a definition to clarify this proved difficult — searching for the term “value” is a tricky process — but from what I found, for practical purposes, I think that’s basically it, i.e. brightness or luminosity.